The term “nasal polyps” typically refers to benign, inflammatory growths of the sinus mucosa that can fill up the sinuses and nasal passages. The symptoms caused by nasal polyps are similar to that due to other forms of chronic sinusitis. However, blocked nasal passages and reduced or an absent sense of smell is more common in patients who have nasal polyps. Because other nasal conditions can present like a polyp, it is important to have a thorough ENT assessment to ascertain the underlying cause of chronic nasal symptoms.

Once the diagnosis of nasal polyps is established, initial investigations may be performed such as for allergies and immune function, and a discussion regarding the nature of the disease and available treatment options. Co-existing asthma or sensitivity to aspirin are sometimes linked with nasal polyps and can impact long-term outcomes. It should be noted that allergies are not a major cause of nasal polyps, however if present, should be treated for best outcomes. A visit to an allergist / immunologist and a respiratory physician may also be recommended, if atopy (an allergic predisposition) is significant and for better management of asthma. 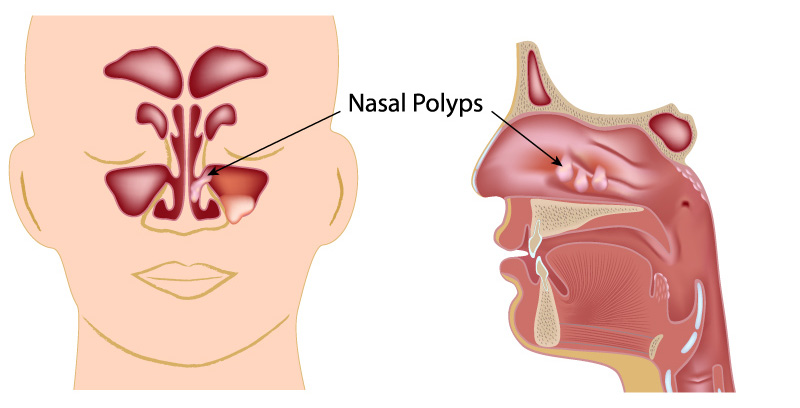 Even after an assessment for known causes of nasal polyps, quite a few people’s nasal polyps are considered “idiopathic”, in other words, no known cause can be found.

One of the factors involved in nasal polyp disease is the abundance of bacteria and fungi colonising the sinus cavities and making the inflammation worse. The normal flora or “good” bacteria that live in sinuses is replaced by bacteria that can cause inflammation and damage to the sinus lining, such as Staphylococcus aureus and Pseudomonas bacteria. These organisms are hard to get rid of with antibiotics because in some people the bacteria are present in a biofilm form, which is resistant to antibiotic treatment. Having said this, biofilm form of bacteria can also occur in other types of sinus disease and are successfully treated with a combination of antibiotics and surgery, such as in sinusitis due to tooth infection or due to blocked sinus openings. However, despite medical and surgical help, some nasal polyp patients are unable to maintain a long-term control on the bacterial burden or completely repair their sinus lining. So it seems that there is an underlying tendency for nasal polyp patients to harbour bacteria and fungi, and get recurrent colonisation and infections.

It is now increasingly recognised that there is an inherent susceptibility within the sinus mucosal immune system that may not be able to successfully control the inflammation in most patients. However, the exact nature of this susceptibility is not known and is under intensive study. This problem can also affect the lungs and therefore many nasal polyp patients have asthma or asthma-like symptoms. It also seems that the sinus lining reacts abnormally when exposed to dust and pollens, and this is exemplified in patients with co-existing allergy. Contrary to common belief, nasal polyps are not due to allergy, because as we know, there are several people with allergies who do not have severe sinus or nasal polyp disease. However, if an allergy is present in a nasal polyp patient, the manifestations are much more severe. Currently there is quite a bit of research underway that is looking into ways in which to help the body’s own special control “regulatory” mechanisms to work more effectively in order to moderate the inflammation that occurs due to common bacteria and harmless particles that we breathe in.

The treatments described for chronic sinusitis also apply to nasal polyp patients. In addition, a short course of “steroid” or prednisolone tablets is often considered as a first-line treatment as most small to moderate-sized polyps can respond favourably. Prednisolone may not be suited to some patients, especially patients with known stomach ulcers or diabetes. It should be noted that the effect of steroid treatment on nasal polyps is variable and often the benefit is temporary.

Factors that can exacerbate sinus irritation need to be controlled. If exposure to dusty environments is a problem, then in addition to regular nasal saline rinses, a nasal filter (such as here and here) may be helpful. Avoiding smoking and smoky environments and allergen avoidance can be helpful. Rinsing your nose with saline rinse (recipe) will reduce exposure. Aspirin desensitization or allergen immunotherapy may also be indicated.

Quite a few chronic sinusitis sufferers are deficient in Vitamin D (see article here) along with many Australians. Vitamin D has several health benefits, one of which is improving the immune function, and can be replaced with supplements. Lacking in iron can also affect immune cells, and iron deficiency can usually be treated readily. Your GP can help with these.

Some patients may have food intolerance and an elimination challenge diet and avoiding foods that trigger symptoms may be appropriate in some patients.

Although surgery is not advocated as a cure for nasal polyp disease, it forms a vital component to “maximum” therapy that has a good chance of achieving “remission”. The goal of surgery in nasal polyps is to clear the nose and sinuses of the polypoid thickening and trapped mucus, inflammatory cells, bacteria and fungi. Following on from surgery, ongoing medical treatment is critical to ensure that the sinus inflammation is kept under control. The response of nasal polyps to medical and surgical treatment and time for recurrence varies considerably from patient to patient and nasal polyps can recur. Several factors may account for this, the most important being the nature of the underlying inflammation. Currently, the cause of nasal polyps in most people is not known.

ABOUT THE AUTHOR, DR HARSHITA PANT:

Dr Pant undertook post graduate fellowship training at the University of Pittsburgh Medical Centre in the USA as a fellow and clinical instructor in minimally invasive skull base surgery, rhinology and allergy. She has a unique understanding of the influence of microbes (bacteria, fungi and viruses) and the patient’s immune system in chronic sinusitis and has extensive training in the medical and surgical treatment of nose and sinus problems. Dr Pant specialises in advanced endoscopic sinus surgery and skull base surgery in both adult and paediatric patients, using minimally invasive endonasal (through the nose) approaches. Dr Pant is a staff specialist consultant at the Queen Elizabeth Hospital and a senior lecturer at the University of Adelaide. She has an active teaching and research career at the University of Adelaide.